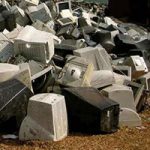 The UK is continuing to collect over 40% of waste household electrical equipment for recycling despite not quite achieving the same level of performance as seen earlier in the year.

Figures published on the 1st December 2010 by the Environment Agency show that between July and September 2010 279,997.081 tonnes of household electrical and electronic equipment (WEEE) was placed on the market in the UK, with 114,725.527 tonnes of household WEEE collected for recycling – amounting to a 40.97% collection rate.

This indicates a slight drop when compared to the record figures achieved for the previous quarter, with a 44.3% rate achieved between April and June 2010. However, it is consistent with the performance for the year, as the UK collected 41.55% of material collected for recycling during the first quarter of 2010 (January to March).

The latest figures also show that the amount of material placed on the market rose between the second and third quarters of 2010. For example, the amount of category 2 WEEE – ‘small household appliances’ – placed on the market increased by 12,242.389 tonnes between the two quarters. Although, the amount of small WEEE collected in July to September was 385.991 tonnes lower than the previous quarter. The decline in the amount of small WEEE collected was symptomatic of the period, with only a handful of materials showing an increase in collection levels. Cooling appliances containing refrigerants – category 12 WEEE – showed the greatest increase, up 1,487.335 tonnes from April to June to 25,553.604 tonnes in the July to September figures.

If you are concerned about the recycling of your WEEE products, contact Recycling Your IT and we can help you with your recycling needs.