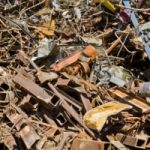 Early this year, the customs office in Indonesia seized 113 containers of scrap metal, each weighing 28 tonnes that were allegedly contaminated with hazardous waste, at Tanjung Priok Port in North Jakarta.

The containers, 89 of which were from England and 24 from the Netherlands, arrived in five shipments between late December and January from ports in Felixstowe, England, and Rotterdam, the Netherlands.

The Environment Ministry’s deputy director for hazardous and toxic waste management Masnellyarti Hilman has said that every year developed countries look to send their waste to Indonesia.

“Due to our lack of awareness, they sometimes send the waste illegally and others have falsely claimed that the waste was basic materials,” she said.

She said the flow of such waste into Indonesia had shortened the life spans of landfills in the country and caused health problems among scavengers.

She added that the ministry was cooperating with the Trade Ministry to draft a regulation on Secondhand Workable Electronic Stuff to prevent the flow of e-waste into Indonesia.

Based on Environment Ministry data dated 2006, Indonesia had 80 large and 150 small-and medium-sized electronics producers, most of them in Java, North Sumatra and Batam.

Many spare parts are imported, which opens loopholes for illegal imports of e-waste, but there is no exact data on the amount of illegal e-waste entering Indonesia.

This does not taken into account the fact that Indonesia has hundreds of sea ports, which adds to the problems of monitoring the illegal import of e-waste.

This is terrible news and needs to be stopped immediately.