IT Recycling and Protecting Data 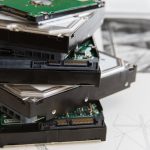 Recycling is a major part of our lifestyles now. Everything from plastics to paper and glass is recycled so that they can be reintroduced into the market as another product. Recycling came about because there was a need to both reduce waste and use up fewer materials, and we’re starting to see just how problematic electronic waste can be in the same regard.

Technology advances incredibly quickly and it’s becoming a huge problem as more and more people are replacing their phones each year and purchasing products that are almost made to be thrown away instead of upgraded or kept for longer periods of time. This means that it’s responsible to properly recycle your technology and IT components.

Sadly, it’s not as simple as handing your old phone, laptop or PC components to a recycler. This is because there are data concerns regarding personal or private corporate data that could still be left on your devices.

Security concerns with IT recycling

One of the biggest security concerns with recycling IT components is that data could be left on those devices. For instance, if you’re recycling a personal phone then it could still have all of your data on it such as phone numbers, addresses, photographs and so on. It’s similar for a laptop computer, where a lot of your data could still be lingering on the device even if you try to wipe or delete everything.

As a result, it’s important to use an IT recycling company that can give you peace of mind when it comes to destroying customer data.

Why is data security important?

But you might be wondering why it’s your concern in the first place, especially if the data isn’t yours, belongs to your company or doesn’t actually point to you.

Unfortunately, the data can be used in a number of different ways that can cause problems. For example, if you get rid of a server or hard drives used by your previous company, then a lot of customer information such as addresses, emails and phone numbers could be stored there. This security breach will cause a huge problem that could lead to legal action being taken by those affected by it, and you might suffer huge losses and encounter massive problems as a result of it.

Can’t I just delete my files?

With the way hard drives and storage mediums work, nothing is ever fully deleted. After all, it’s called a recycling bin for a reason, not a garbage bin!

What’s actually deleted is a small bit of information that points to where that data is located on the drive. It opens that data up to being overwritten, meaning that a file can take its place without a conflict happening. If there was data pointing to that part of the hard drive, then your computer or smartphone would see it and won’t attempt to write data to that sector.

This means that even if you send files to your recycling bin and empty it, you can actually restore the data with the right tools. Even a smashed hard drive can have its data restored to some degree, hence the importance of an electronics recycling company that understands how to wipe data correctly.