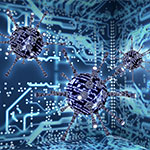 Even if you only pay the most cursory attention to the news, you’re going to have heard of the recent WannaCry cyber-attack. Hitting NHS IT systems, governmental computers and other high profile targets, the attack is estimated to have affected more than 200,000 computers in over 150 countries worldwide.

That makes it one of the widest ranging cyber-attacks ever, but it is an unfortunate fact that it is unlikely to be the last of its kind. As such, it has never been more important to have at least a basic knowledge of the kinds of cyber-attack there are and the ways you can protect yourself against them.

There are a great many different ways that a cyber-criminal can target a computer or IT system. Four of the most common forms of cyber-security threats, however, can be defined as ransomware attacks, phishing scams, distributed denial-of-service attacks (DDoS) that use botnets and hacking.

The recent WannaCry attack was an example of the use of ransomware. Ransomware is a type of malicious software (malware) which allows its user to essentially take control of a computer or whole IT system by encrypting all of the data stored on it. Those cyber-criminals who unleash ransomware will then typically demand money from the computer or system’s owner in exchange for returning control.

Phishing scams are perhaps the most common form of cyber-attack and use email as a way to trick victims into giving up financial or other confidential information. Emails are typically sent which claim to be from official sources or trusted senders and aim to con those who receive them into giving up information useful to the scammers.

Botnets are software robots which can be used to give their user virtual control over a computer and turn it into a so-called ‘zombie’. If and when a cyber-criminal has a large number of ‘zombie computers’ under their control, they can then use them to launch a distributed denial-of-service (DDoS) attack. That is an attack which targets a specific website or server and inundates it with traffic and data, until it crashes.

Hacking, finally, is a catch-all phrase used to describe the different ways in which unscrupulous individuals can seek to gain access to somebody else’s computer. Such hacking can be used to find security weaknesses, steal valuable information or commit any number of other similarly criminal activities.

How to Protect Yourself

As the WannaCry attack ably showed, any computer or network can fall foul of a cyber-attack. Fortunately, however, there are a few simple things you can do to make your own devices less vulnerable.

Firstly, it is crucial that your computer or laptop be protected by anti-virus software and a firewall. What’s more, it’s important to maintain that software, to keep it up to date and to follow any suggestions it may make to you.

Beyond that, it is also vital to be sensible in your online activities and to apply a degree of common sense to your IT usage. Dodgy and dangerous websites or emails, after all, are often pretty easy to spot if you put your mind to it and avoiding visiting or opening them mitigates any risk they may pose.

Any cyber-attack which involves the seizure of control of information or theft of data, what’s more, can be nullified with a sensible and regular back-up routine. Backing up your data to a removable hard drive, after all, means any ransomware or similar attack will have much less of an effect on you.

Finally, if you do suffer from a ransomware attack like the recent WannaCry example, it is crucial not to pay the perpetrators. Doing so will only show them and others like them that attacking your computer or system is potentially lucrative, and you will almost certainly suffer further attacks.

Disposal of IT Equipment

Even if you think you have deleted everything off of your old IT equipment, the likelihood is that it is still there. That’s why when you dispose of anything that holds personal information it’s important to ensure that any data is completely wiped.

This is where a professional company comes into play, they specialise in deleting everything from old IT equipment before it is recycled or reused elsewhere.

You can find out more about how data destruction works here.