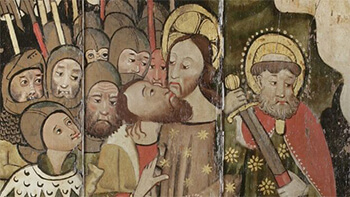 A very rare medieval painting dating back more than 500 years, may have been saved by a quick thinking owner, who recycled it into the Ten Commandments to hide the original work.

The original painting shows Judas betraying Jesus and has been dated from around 1460. It would have originally hung in all its splendour and glory in a prominent position in a church. At the time when the Protestant Reformation started, many churches and works of art where either defaced or destroyed particularly one like this.

This painting, however seems to have survived by possibly the original owner, or someone within the church, turning it round and painting the ten commandments on the back, hiding its original meaning.

It is estimated that during this period some 90 percent of Britain’s religious art was destroyed in the 150 years after the reformation.

This painting would have been at great risk from devout Catholics, who would have defaced or destroyed this work of art as they hated the figure of Judas.

Conservationists at the Hamilton Kerr Institute, have restored the artwork to its former glory using the latest technology. They described it as one of the rarest artworks of its type. It is named “The Kiss of Judas.” The institute said that when the panel arrived it had a considerable layer of dirt, bat faeces land layers of discoloured varnish.

Now restored to its former glory it has been purchased by the Fitzwilliam Museum in Cambridge and is on display in their Rothschild’s Gallery of Medieval Art.